As autumn wanes, and winter seeks to take hold,  sometimes the weather smiles on the fortunate angler, allowing just one more trip before the season closes.

A recent Saturday delivered one such day, where there was enough sun to warm the still air, giving hope of a late hatch.  I had to head up to the mountains to run a couple of errands. If I finished early I’d have the chance for a few peaceful hours on the water, so the rod went in the back of the car too.

By 12:30pm , my business was finished, so I decided to drop in to the river nearby,  at a public access point that I had always driven past but never fished.  On arrival, I was disappointed to see a truck parked up. My suspicions of another angler were confirmed by the fish ruler resting on the back seat.

With no clues as to the type of angler – spin, bait or fly  – and that I really didn’t have time to look for another spot, I shrugged my shoulders, and grumbling, I lowered my expectations.  I consoled myself with the thought that I’d be exploring new water at least, and it would be good research for the next season, if as I feared , I was following another angler upstream.

Down by the water, I strung my rod, with dry and bead head dropper and drifted it through the first run. It was a nice stretch, but undoubtedly well fished, so I wasn’t surprised that the flies remained untroubled after each pass.  It was nice to be on the water on such a glorious day – we anglers tell ourselves this, but really it is always a better day if the fish cooperate. I was hoping they would.

Just above the run was a long slow pool, I stood and watched for a few minutes, a small dimple soon gave away the position of a sipper quietly working the bubble line.  Wish granted. With a wall of tree’s behind I could only roll cast, and I was able roll a few my small Royal Wulff combo out for a few well-directed casts before …  nothing.  I decided to swap to a natural brown nymph and a parachute emerger then watched and waited.  No more rises. I had put my finny friend down. My presentations had not been the most delicate;  leaving on the small bead head had been a mistake. I moved on.

In the next stretch, the emerger was followed by a small dark shape which nosed it roughly a few times before sucking it down.  My lift was poorly timed… . I spooked that one too!  0 – 2 !  At least the trout were willing, even if the angler a little clumsy.

Time to concentrate. I continued up-stream fishing the likely spots.  Soon enough he emerger vanished as a small rainbow tugged the nymph from below. It was my first drift through in a small side branch. A cast or two later I returned a brightly spotted brown trout, its twin in size, to the same run. I spent the next hour working from pool to pool, landing a handful of emerald spotted fellows. All of whom found the small brown nymph much to their liking. 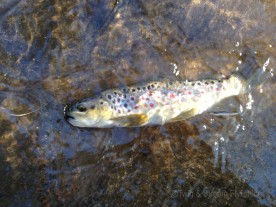 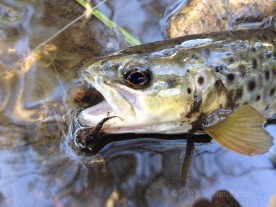 I spotted an angler approaching from upstream.  I checked my watch knowing I had made my last cast ; it was nearly time to head back to the car, so I could be home at the allotted hour (before dark). I wound in and hailed him, and we compared notes as we made our way back down stream together.  Earlier in the day, in the faster sunny stretch he had good success on a Royal Wulff and bead-head,  yet he had no luck at all fishing ahead of me with the same flies.  At this time of year in the quieter water the trout are often more selective, and I can’t say for sure, but perhaps that is why the river gave up a half-dozen sprightly fellows to my natural nymph.

As I sit here, reflecting on what I suspect was the ultimate outing for this fantastic season, my thoughts are already turning to opening day in September.  So whilst the waders and flies are being put away for the winter months, the rods and lines will not. I will be preparing for next season, working on casting skills for the coming season.

“I had just one day out with Ian, but it was a great day. Scrambling up a small bush stream very early in the season… he helped me find the fish and pick them out of their hiding places. Ian is highly knowledgeable technically and in streamcraft. He put me into fish I had no right to find. If I am back in Melbourne, I’ll be looking him up.” Chris U.K. Oct 2018.

You can buy Leaders, Flies, and Gift Vouchers and other items that come available. Go to Shop