How dangerous are snakes?: This is a question I am often asked, along with “Do you ever see snakes?”, “Aren’t you worried about being bitten?” and “Have you ever been bitten?” – (Yes, Yes and No in case you were wondering ).

I guess most people want to know What are the risks and what can we do about them?  Apart from staying at home and not going fishing that is.  Since just my personal experience was sufficient to answer this, I undertook some research, and ran a short survey (100 anglers)  and I have based this short blog on the results of both.

How venomous are Australian snakes? 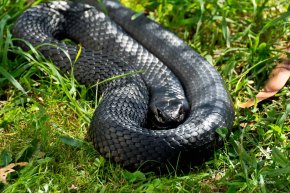 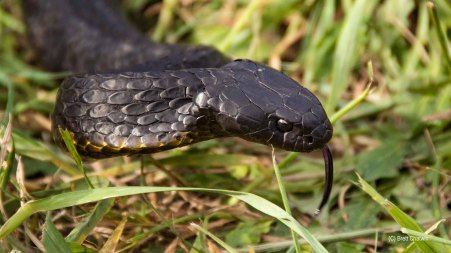 Australia’s snakes are very venomous: Australia has the eleven most venomous snakes in the world. [ref. 1]  Of these the ones that may live near our trout streams (TAS, VIC, NSW)  are:  Eastern Brown Snake (2), Tiger Snake(4), Black Tiger Snake (5), Gwardar or Western Brown Snake (9), Copper Head(11) and Mulga or King Brown(20), Red Bellied Black Snake(21).  Note the figure in bracket is how they rank in venom toxicity.

Prior to the development of anti-venom therapy less than 10% of brown snake bites were fatal but nearly 50% of all tiger snake bites were fatal.  [ref 2.] Brown snake venom is very toxic and fast acting, so it would seem other factors preventing envenomation may have contributed to the lower death rate.  For envenomation to occur, the fangs must penetrate skin, and the snake inject/exude venom. Tiger snake fangs can be up to 3.5mm ( between 1/8 and 9/64 of an inch) and Eastern Brown snakes have fangs up to 2.8mm ( about 7/64 of an inch). [ref. 2].

The good news is that since the development of anti-venom, there have been very few deaths in Australia (4-6) per year. [ref. 3] . However it is important to know how to treat a bite, and to get medical assistance as soon as possible.

How likely are they to bite us ?

The Eastern Brown Snake is fast moving, and often aggressive, and is responsible for the majority of snake bites in Australia. Mainland tiger snakes are responsible for the second-highest number of bites in Australia, while the Red Bellied Black Snake, and Copper Head Snakes are usually less aggressive, and normally escape from human’s if possible.  The King Brown Snake is not found in Tasmania or Victoria, and whilst reputably less aggressive and venomous than Brown and Tiger snakes, they can inject a large amount of venom in a single bite. 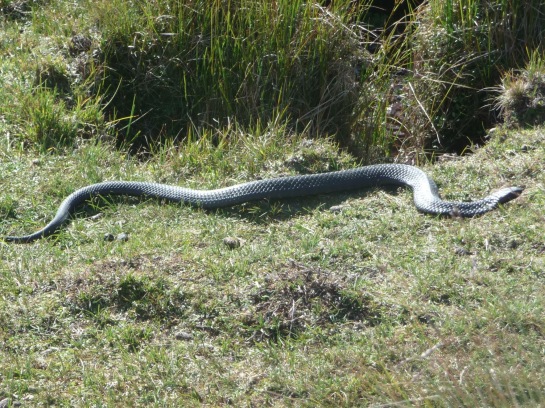 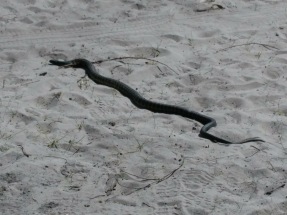 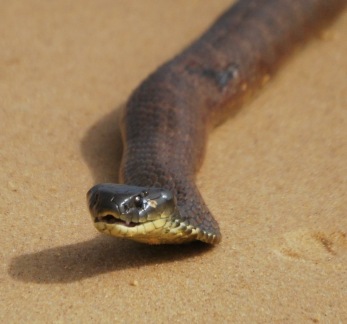 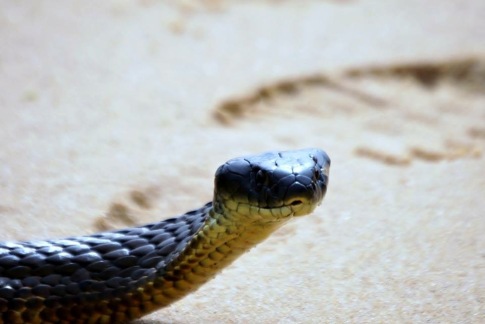 However, in Australia, according to Bryan Fry, an Associate Professor, herpetologist and venom expert at the University of Queensland: “Snake bites are very, very rare and often the fault of the person being bitten. Most bites occur when people are trying to kill a snake or show off.” [ref. 4]

How likely are we to encounter a snake ? 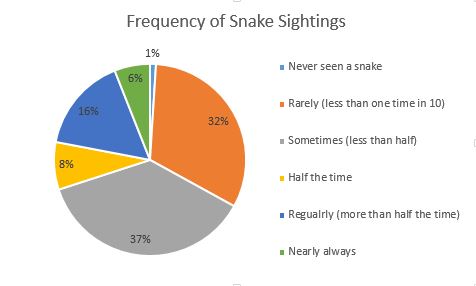 99 out of 100  respondents have seen snakes while fishing. The frequency of snakes varies by location but a third of respondents, see snakes more than half the times they go fishing.  So un surprisingly, you are almost guaranteed to see a snake if you regularly fish for trout.

What type of snakes do you encounter? 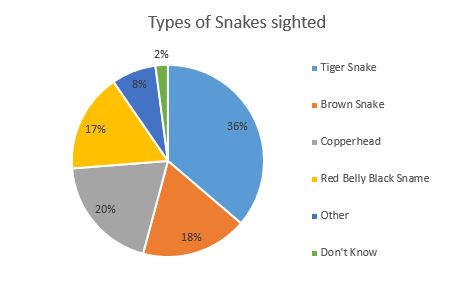 How likely are they to bite us ? 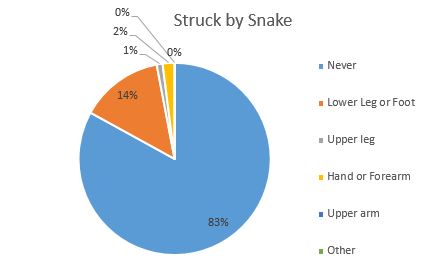 Seventeen of the one hundred anglers surveyed have had a snake strike them (fourteen on the lower leg, one on the upper leg and two on the hand or forearm). Of these seventeen, three were struck on bare skin.  Those struck on the leg all reported to having stepped on or near the snake without seeing it initially, and all except one were wearing some protection on their legs. 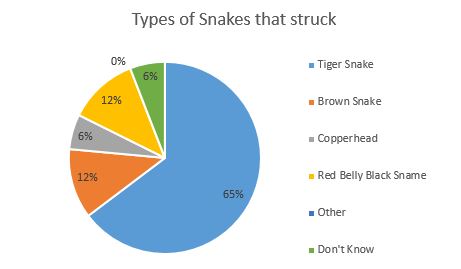 Based on the survey the snake strikes were mostly from Tiger Snakes (65% of strikes), followed by  Brown Snakes (12%), Red Belly Black Snakes (12%) and then Copperheads(6%).

What protection do waders/gaiters/boots give ?

Six people reported being struck while wearing rubber/plastic waders, but none were  envenomed, two of these also wore gaiters. Four people reported being struck while wearing breathable waders, three were never envenomed (two of whom were struck on the boot), and one had a possible partial envenomation but did not require treatment. (This person reported having a headache the next day, finding venom on their waders, and a scratch on the leg). One person was wearing gaiters when struck, they reported feeling ill the next day. None of the respondents had to have anti-venom. Only one went to hospital. 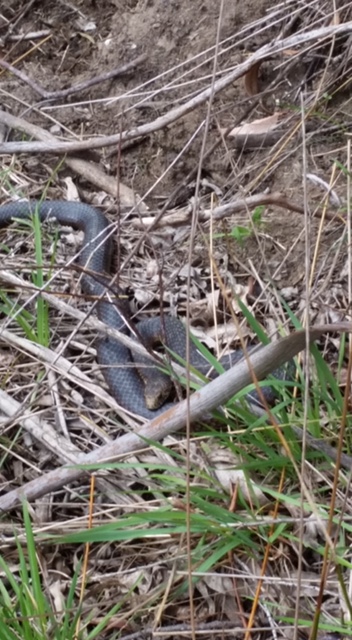 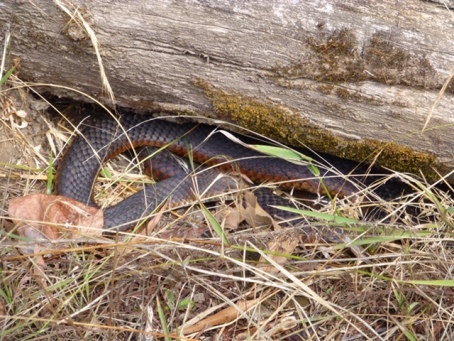 Based on this survey it would seem: rubber/plastic waders give the best protection.  By themselves breathable waders may provide some protection, but it is possible that a snake bite, and venom may penetrate.  Similarly gaiters themselves may not fully protect from snake envenomation. Waders plus gaiters seems to provide better protection.

If you go fly fishing in Victoria, Tasmania and New South Wales it is almost certain you will see one of our venomous snakes.   If you do see a snake, leave it be and give it a wide berth to minimise your risk of being bitten.  No matter how vigilant you are, there is still a reasonable chance, sooner or later , that a snake will strike at you, and it will probably be the one you did not see.

Based on the results of the survey, it seems that wearing waders and or gaiters provide some protection, but will not guarantee 100% protection from envenomation from snake bites. To prevent envenomation, protection is needed: Either a material tough enough or thick enough to prevent the needle sharp snake fangs penetrating the skin is required. Based on the length of fangs (3.5mm for a Tiger Snake), protection that is 4 mm or thicker when compressed should reduce the risk significantly.

So be vigilant, keep at least one eye on the bank (while you have the other on the river)   and if you see a snake, leave it alone, and it will most likely leave you alone.  But still be prepared.  Learn what to do and how to treat a snake bite should it happen to you or someone you fish with. St Johns Ambulance offers the following advice for treatment of snake bites: St Johns Ambulance snake bite treatment fact sheet.

Now enjoy your fishing, or try to!

I kept the survey short (9 questions), and posted it to a few Facebook fishing groups.  I asked a number of questions in relation to frequency and types of snakes, and whether people had been struck by a snake, and whether envenomed. In retrospect, I should have added a question about the respondents location.  The results are based only on 100 respondents, and these may be weighted/skewed  more heavily towards those who encounter snakes more often (i.e. those who have encountered snakes may have been more likely to respond).

Many thanks to all who responded to the survey and agreed to let me use their photos. In particular thanks to Brett Chatwin, Brendan Turiff , Peter Watson and Damo Blackwell.

4 thoughts on “Fly fishing in Australia: How dangerous are snakes?”

“Twig and Stream are the leaders in teaching fly fishing you cannot find a more experienced guide and teacher.  Ian has the patience of a saint with beginners, cannot recommend highly enough.  Actually caught fish too”   John Feb 2021

After a weekend of chores, I snuck out for an hour before dark, one chance and one nice rainbow.
Rain might have dampened the spirits but not for long as the fish were on the chew. Richard had a crash course in nymphing. Plenty of chances on offer, and many converted!
Stephen was a happy convert yesterday. He had a lean-to-fly-fish day with us. A great student , never having cast a line before , by the end of the day he was confidently shooting line and managed to get 3 fish to the net.
The lads had some fun learning to fly fish last weekend!
Follow Twig & Stream Fly Fishing on WordPress.com