With Easter falling quite early this year, we planned a trip to the mountains for a short break. Autumn arrives in March and it can be a tricky time of year. As summer wanes the terrestrial numbers diminish, but the Autumn mayflies often are yet to appear. The water is low and clear and the trout cautious and less numerous and are not actively feeding in numbers. We were expecting typical cool Autumn days, but we were fortunate to catch a some un-seasonal almost summer-like weather. 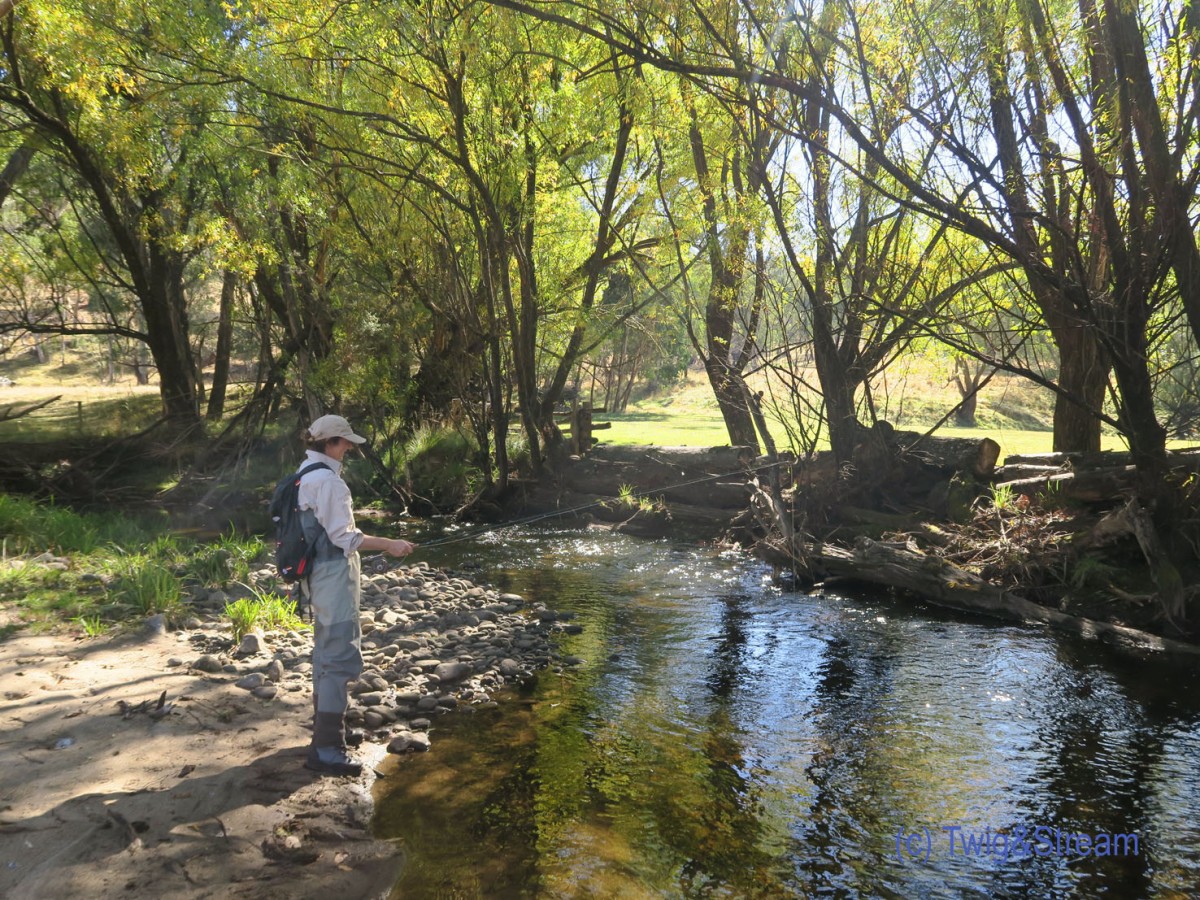 Arriving early Friday morning our plan was to enjoy at least one day’s fishing on a small mountain stream, before the regular Easter campers arrived late that day.  As we checked in to our accommodation, we discovered, according to our host Graham, the stream had recently seen quite a lot of traffic.  Apparently it had been fishing well and good sized fish caught. 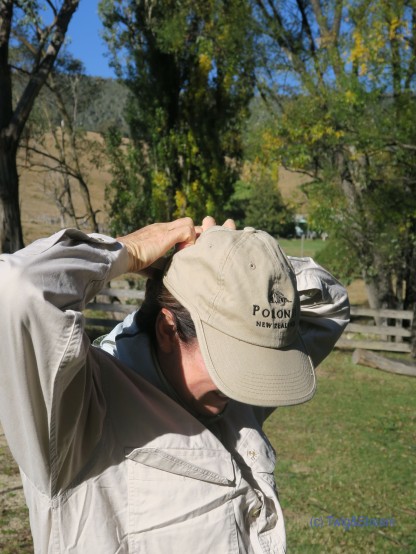 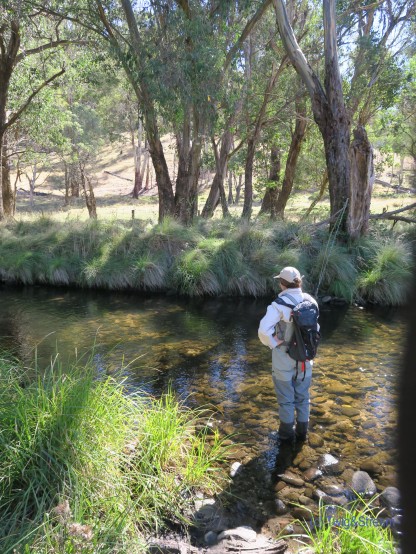 As we geared up, hoping that the angler numbers had been exaggerated, but the size of the fish had not.  The sun was already beginning to warm up as walked along the bank and there were hoppers aplenty leaping left and right to avoid being crunched by our wading boots. We hoped this augured well, as we had already tied on hopper patterns. 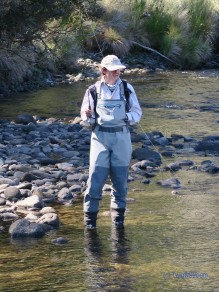 Searching for the next stretch 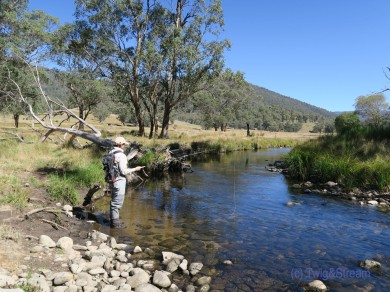 Did I see a rise? 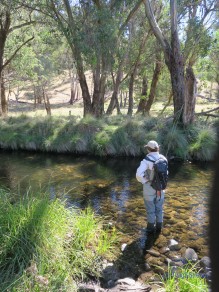 We took it in turns to fish a short stretch at a time.  The first few looked promising, but yielded nothing.  As I rounded the third bend, I saw a rise in a back eddy beneath a low hanging branch against the far bank.  I snuck into position staying low, measured out some line, and watched and waited.  There was another swirl.  I flicked out a back cast  and snagged the tip of a bush behind me.  Cursing I crawled back and retrieved my fly. I returned and anxiously waited, another swirl. Phew! I made my cast.  The hopper sailed beneath the branch and plopped down on the edge of the back eddy.  It drifted deliciously along the seam, right by the fading ring of the rise, untouched.  Then,  just as the fly was about to drag and I about to recast, the water shimmered unnaturally and in a shaft of light a spotted flank gleamed below the surface.  It followed, then was lost in a shadow, and the fly dragged and sank.  But before I could move there was a spotted flash again as the trout turned where the fly had disappeared, so I lifted and the line came tight. My 3wt bent deeply, and water erupted as the trout felt the pull of the hook. The brief tug of war ended a few minutes later with a “good sized” trout resting in my submerged net. 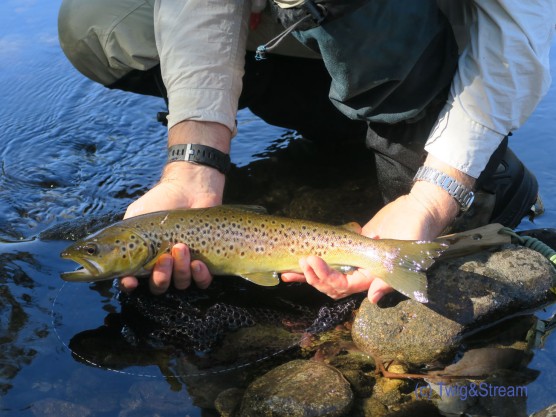 A “good sized” trout from a small stream in Victoria Australia. 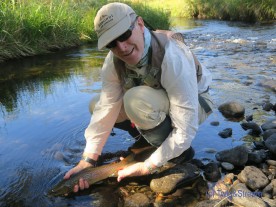 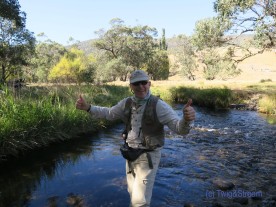 We found a few more of these stunning browns, but none made it to the net , and they did provide some excitement: like plopping my hopper heavily on a long grass lined glide and seeing a bow wave rise on the glassy surface, and accelerate towards it from 15 feet up stream.  A big head surfacing and engulfing the hopper,  waiting for the tell-tale swirl to signal the fish turning away.  Lifting and feeling the weight of a good fish put a deep bend in my rod only to have the hook pull on the first heavy head shake. 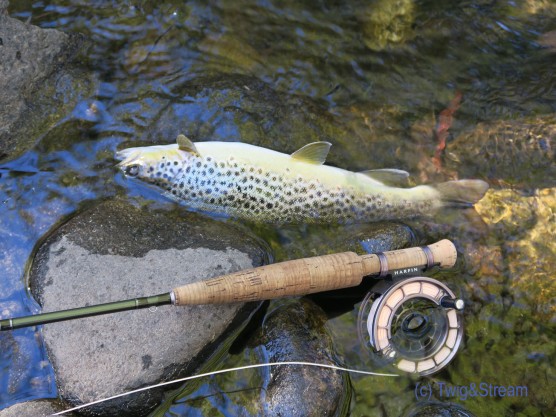 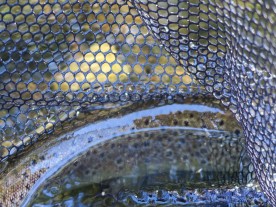 To catch a trout? 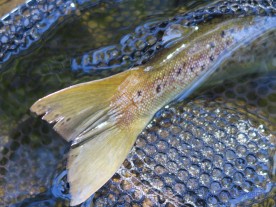 Tail of a Brown trout

We fished on to early afternoon, and while the catching proved a little slower than hoped, it was nonetheless rewarding with a handful of healthy browns making it back to the stream after a brief rest in the net.  We returned to camp to reflect on the day and enjoy the sunset across the valley. 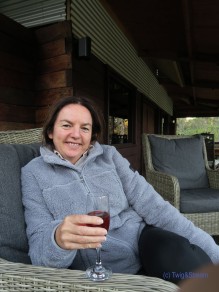 Enjoying a glass of bubbles after fly fishing. 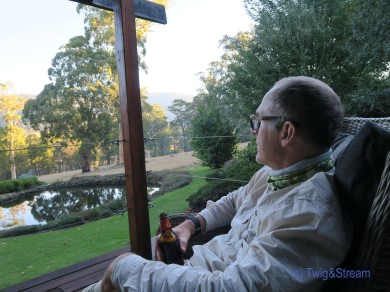 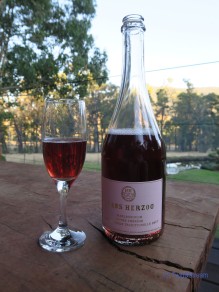 The next day we tried our luck on nearby streams, dodging the Easter campers. Unfortunately all places we fished bore the fresh boot marks of yesterday’s anglers, but whilst there were no greedy smash and grabs, with persistent well placed casts we still managed to coax the odd trout to reluctantly take the dry fly.  Of those few takes we  felt the weight of fewer than half, and landed perhaps half of those again, nonetheless we really enjoyed messing about on the river surrounded by the amber clad landscape that seems to glow in the Autumn light. 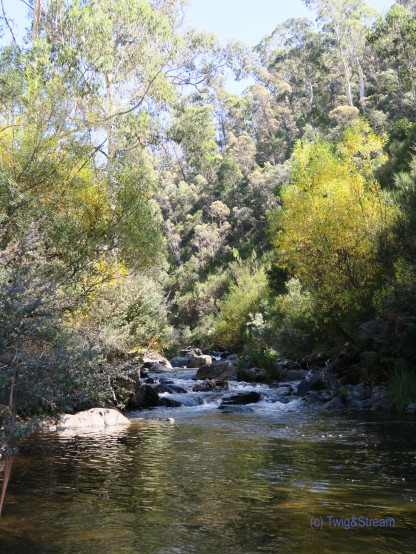 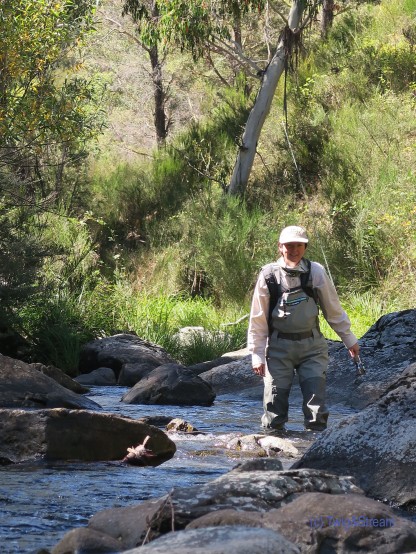 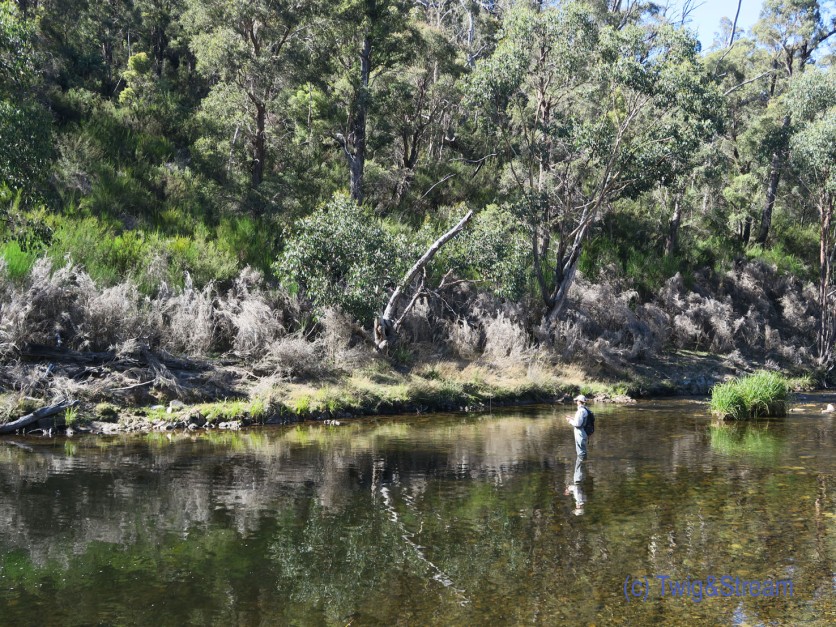 “Ian is very knowledgeable and fun to work with. As a beginner fly fisherman he helped me understand the principles of casting and sport in general in a very engaging and effective way. I would recommend Twig and Stream to anyone who is interested into getting into fly fishing.” N.W. Sep 2022.

A couple of consolation prizes after I lost a chunky fish thanks to a wind knot (complacency really I didn’t check my tippet before fishing today) . These two were taking little caddis in the slow water on the far bank … satisfying to get the drift with a long slack line cast…
Wednesday night was cold, strong southerly making fishing the meadow streams challenging. After a slow start things turned on about 7:30pm . 1 brown an 9 rainbows to hand all fit and chunky dry fly takers. #wildtrout #dryflyfishing.
This guy was hanging in the side of the truck this morning. A big Mayfly.
It doesn’t always go your way.. a refusal, a miss, pricked the next two, and then things start to go your way, some how u managed to set the hook on this guy fishing into the glare.. still not sure how..
Follow Twig & Stream Fly Fishing on WordPress.com